Posted on August 18, 2020 by rainydaytextiles

I think I mentioned a couple of weeks ago that I had my small Norwood loom warped with a chenille scarf, but I was going to change that a bit…which I did…and boy was that a job!

I already had a scarf wound on, with weird blue and mustard striped of tencel…I don’t know what I was thinking…they weren’t spaced well and the mustard was not a good color…. in fat, this chenille was some that I had dyed when I first was learning how to dye and I had been dismayed…10 years ago?… about the colors…very girly…blue and pink…again…not sure what I had been thinking… 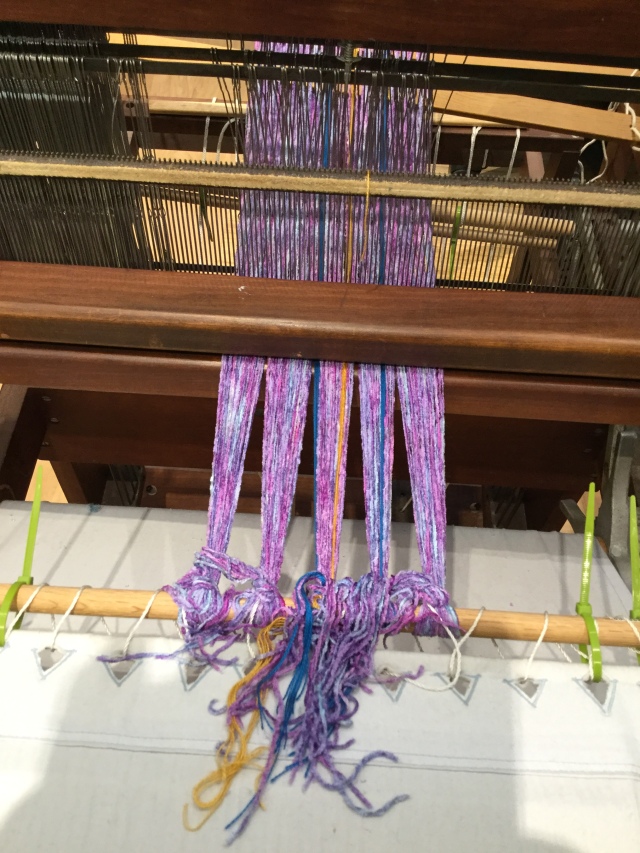 Anyway, I digress, I pulled the whole scarf out, keeping the lease sticks holding the cross in place, so now I had a puddle of chenille on the floor in front of my loom. I looked at it, and realized I should have taken each thread out of the heddles before pulling it, but it was just too late to fix that. It was only a 6 inch wide scarf, I think that’s why I had put in the tencil stripes, but anyway, I cut those threads off and threw them away. Then I counted threads..60. Then I thought… And remembered I had seen a color and weave pattern in a book and that had also been chenille…so I spent a day looking through weaving books and getting totally sidetracked, but I found it! And did some calculations and figured out if I put a one inch stripe on each side, I would have enough width that I could weave this up and make cowls…so that’s the game plan! Chenille cowls in a color and weave pattern!

I wound a warp of 120 ends, 7 yards long. I then zip locked another bar to the apron on the back of my loom and slipped the start of the cross of the 120 ends of white chenille onto that. I added another set of lease sticks to the back of my loom, above the original lease sticks holding the handyed warp. ( actually. I didn’t have another set of lease sticks, I jury rigged a set out of some window blind slats I had saved from a broken blind). I weighted each warp, and slowly wound it on, being careful of the dyed one that was still threaded thru the heddles. 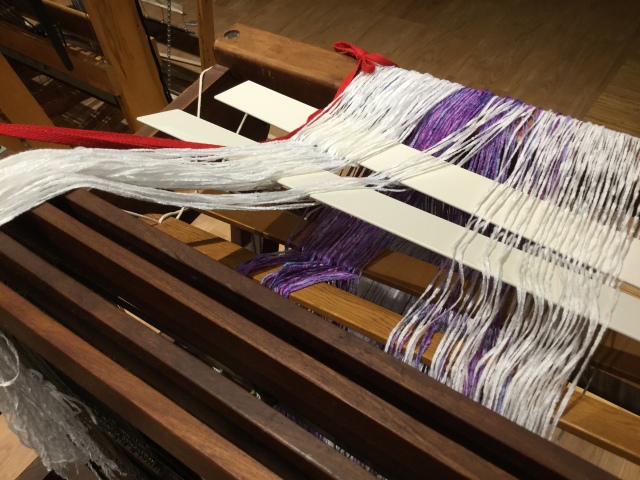 Then I pulled the dyed warp out of the heddles, and rewarped the entire mess.

Okay, it actually wasn’t much of a mess, just a bit time consuming to work with two sets of crosses…but it worked! See how it looks?

There seems to be 2 weird white lines. Not sure if that’s a treading mistake or not being consistant with my beating, or if that’s where I advanced the warp….so I will figure that out. It’s been a long time since I used two ski shuttles, but I’m already speeding up!

So, that’s what I’ve been doing the past week…just slogging along…

Oh! And I got my two blue and white spider scarfs done! The first one used an alpaca yarn for the white weft and didn’t felt up like I was expecting…so it’s wider and looser…but very soft and nice. The second one I used zephyr (50/50 merino and silk) for both the blue and the white wefts and it is thicker, slightly narrower and more like photo in handwoven. I like both of them!

My game plan for the coming week is to continue weaving the chenille and to decide on what to put on my big loom…scarf….towels? Table runner? Rep weave pot mats? Hmmm…. 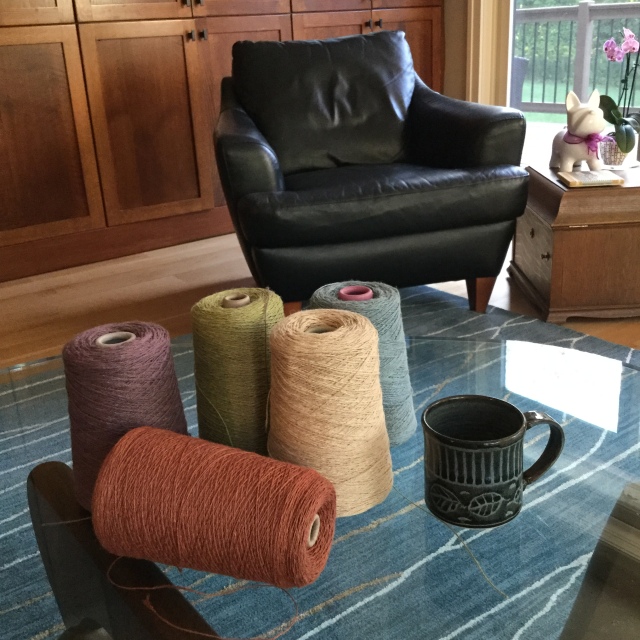 Maybe I will use this linen from Peter Patchies for a project… Mary Doezma coffee cup!

This entry was posted in Uncategorized. Bookmark the permalink.

1 Response to Slogging away…