This is what I’m working on / Memories

Posted on November 14, 2016 by rainydaytextiles

When I was young, I used to get to fly down to Oregon City to visit my Grandparents.  I loved to go Oregon!  I was most often coming straight from Cooper’s Landing, Alaska where I had spent the summer with no running water, no electricity and a pretty rustic outhouse, so my Oregon Grandparents house seemed like s mansion as large as the Governors Mansion in Juneau.  They did have a very grand house on the edge of a cliff overlooking old downtown Oregon city and the river.

My  Grandmother was a weaver, she had a huge loom..( as I remember) and then a small 20 inch wide floor loom.  She would often have a little project on the small loom so I could weave and Sometimes she would have me help her thread the heddles of her big loom…I know at least one time I totally messed everything up..sorry About that Grandma!  That room was fascinating!  It not only overlooked the river, with an occasional train going by way below, but it was filled with nifty tools: ball wonders, bobbin winders, an electric cone winder, shuttles, and yarn.

Years later, after Grandmother was no longer weaving, and I was married with two small babies and living in Grand Rapids Michigan, my Aunt called and asked if I would like Grandmothers small floor loom…I was thrilled!  it’s a 20 inch, 4 harness Norwood made out of cherry…and it was made in Michigan!

I took a couple of weaving classes from the shop in Rockford, but I found it just too hard to try to learn to weave with toddlers running around…so I learned to spin yarn instead, and spent most of my time knitting and spinning, which kept me pretty busy but that loom kept calling me so for the past 5 years I’ve been trying to weave.  I feel like I came 30 years late to the game, but maaan. I’ve been having fun! 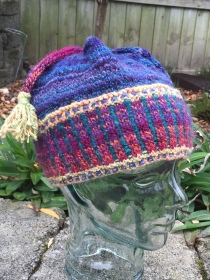 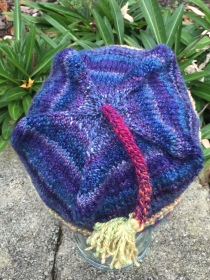 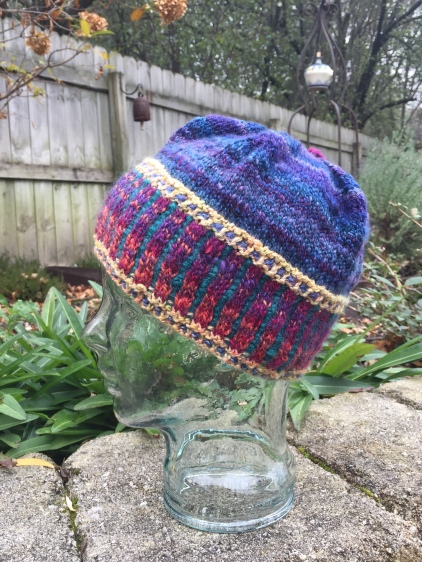 I set lots of goals for myself…and sometimes I totally fail, but then I usually learn something too!

I hope you enjoy seeing what I am up to!
November 2016….towel month!

These are my current towels, the yarn is 10/2 cotton from Webs and I had all of it in my stash.   My original plan was an orange and purple warp, but as I was winding I realized I didn’t have enough orange…so I added the magenta, a serendipitous improvement!   My weft has varied from 10/2 cotton, cottolin, and 8/2 cotton…all shades of red from magenta to tomato orange.  I love them!  It’s like a burst of fire when I walk down the stairs and see my loom!

This entry was posted in Uncategorized. Bookmark the permalink.

1 Response to This is what I’m working on / Memories